In the midst of pylon driving, construction equipment, fenced off areas and the challenges of rebuilding, OSYC hosted another enjoyable regatta. Following a festive July 4th party at the club and the city's fireworks on the beach, the racers showed up ready to sail from the ample beach.

A small but energetic crowd attended this year's addition of the Horn Island Hop. The fleet was composed of a mix of spinnaker and non-spinnaker boats. The Saturday race out to Horn Island began with moderate winds that quickly developed and clocked into a very fast broad reach allowing the spinnaker boats to make the 13 mile ride in less than 1 1/2 hours. Plenty of chicken and beer met the sailors who spent relaxing time in fellowship on the beautiful barrier Island.

It was time to put away the spinnakers on the race back. It was a pure beam reach with healthy wind and waves to add excitement to the journey. GPS tracks on the faster boats recorded boat speeds consistently in the 14 to 16kt range. Saturday night, the racers feasted on a variety of pastas and three separate homemade sauces sure to please the palate. After dinner and communing about the days events, we all called it a night, fat and happy.

Sunday marked the return of the 17 mile Dear Island course. Like a giant triangle, the day's sail was a challenge. The first leg was a light wind beat to weather through the casino channel. Rounding marker 12, the wind began to build for a fast reach out to marker 2. Next, the chutes came out (for those who were carrying) into what seemed to be a wild ride... then the wind took a nap, making for very light air downwind sailing. The more experienced sailors took advantage of this opportunity and turned the final race into an exciting affair. Nearing the finish, the unpredictable July winds shifted nearly 180 degrees making for a very interesting change of tactics to make the finish mark.

After more food and more beer, the racers called it a day and a great weekend of sailing was had by all.

Winners of the Spinnaker Class were:

With construction well underway, hopefully next year's regattas will be a throw back to the days of old with full participation allowing the racers and members to enjoy our brand new building, pool and facilities.

Attached are the complete results by class.

Ken-
Great write up! Great bunch of folks and good racing! For all those who skipped it this year you missed an awesome event. The new clubhouse is going to be very nice! Was great to see some new sailors to our sport and some KIDS sailing!!
BTW- If anybody has any used "A" cats for sale out there- there were a bunch of the folks there very interested in getting one after I was second to the beach boat for boat in 2 of the 3 races (deep beam reach in waves and gusty wind without a foot strap is NOT recommended for us old farts on a boat weighing less than we do!). Gotta thank Jay and Pease Glaser for that new mainsail- Now, wish there was a good way to raise the rear beam on my original design Flyer! 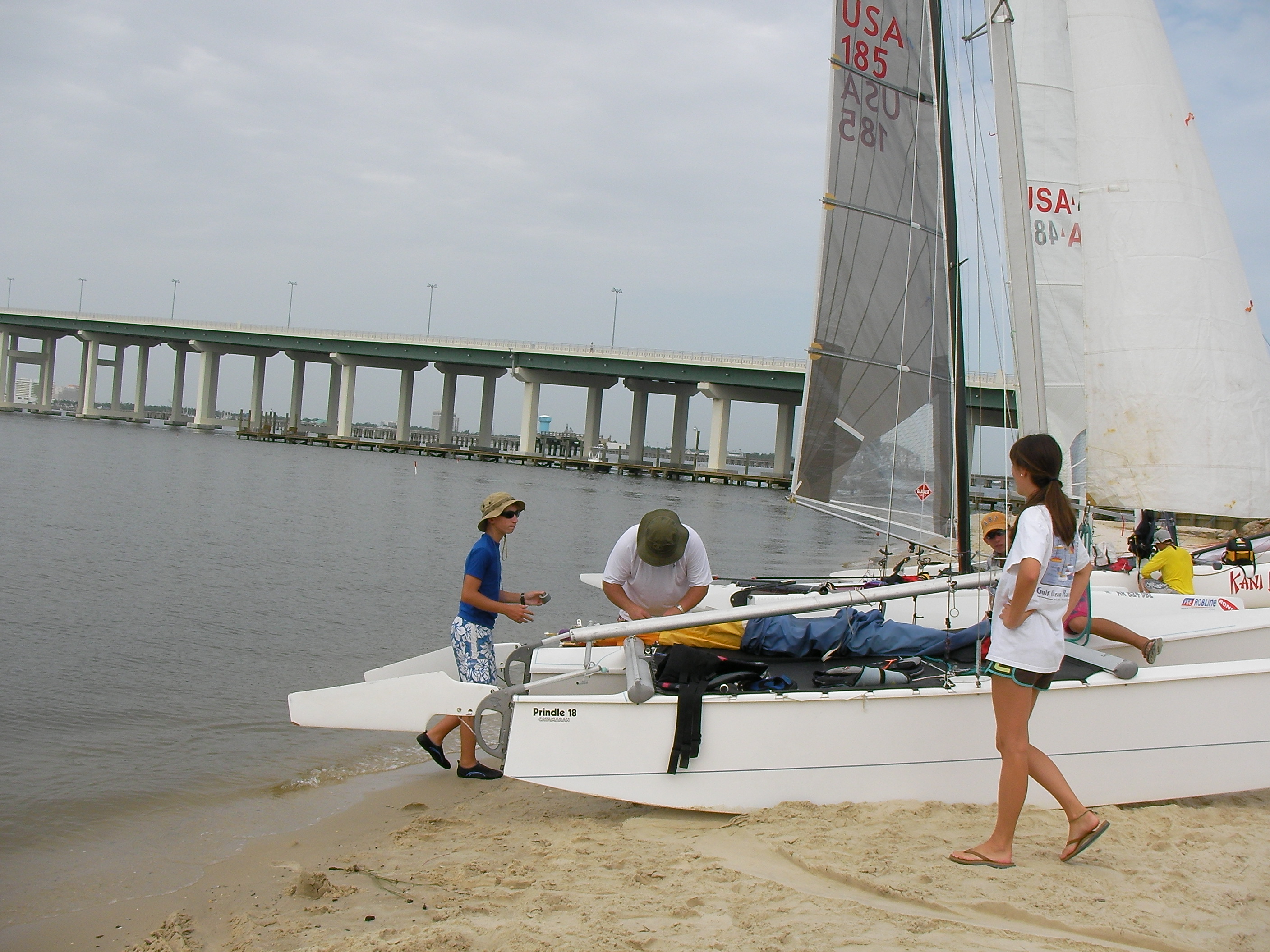 Kirt, go ahead and rub it in. ;> You left me standing still when the wind let up on the last leg of race 3 and unfortunately, I was the third boat in for those same two races that you were second.

Seriously, Kirt, I appreciate you making the long drive. I agreed to audit the sailwave data and help print out the final reports. I did find one additional data entry error that changed the results. Nevertheless, who would of thought that the Prindle 16 corrected out so well. I guess (as Mark Ederer noted) that under reach/reach conditions boats likee the A Cat and Bimaran 18 are losing ground to all of those sloop rigs. In any event, great to sail and visit with you and look forward to next year.

Oh I almost forgot, the Club will be hosting the Shearwater Regatta some time in the fall. I will encourage the flag officers to get out the information early and often and will pass it on as soon as it is available.

Ken-
Wasn't trying to rub anything in! Just explaining the request by multiple people to find them a boat like mine! It's been pointed out multiple times by various others that utilizing PN's for distance races is merely a very gross approximation as these "performance derived" real numbers are largely derived from windward/leeward bouy races with roughly equal windward leeward legs and, increasingly, little to no reaching. In a distance race from point-to-point the boats are sailing on whatever point of sail is required at the time, which is not necessarily any direct windward or leeward courses (as was obvious from last weekend!). Best example of this is scoring spinnaker boats against non-spinnaker in a purely upwind race, and at least you all broke the spin boats into their own class to prevent this.
Please let me know as soon as you know when the dates for the Shearwater are- It is a long drive but you guys are great hosts and I always have a good time there!